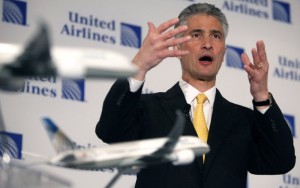 United Airlines announced Tuesday that its CEO and two other senior executives have left the company in the midst of a federal corruption investigation.

The U.S. Attorney for New Jersey is investigating whether United tried to improperly influence officials at the Port Authority in exchange for lower operating costs at Newark Liberty Airport.

In 2011, United seemingly created a new flight route from Charlotte, North Carolina to Newark to allow then-Port Authority chief David Samson to easily go to his weekend home down south.

“The departures announced today are in connection with the company’s previously disclosed internal investigation related to the federal investigation associated with the Port Authority of New York and New Jersey,” United said in a statement. Read more at the New York Times.