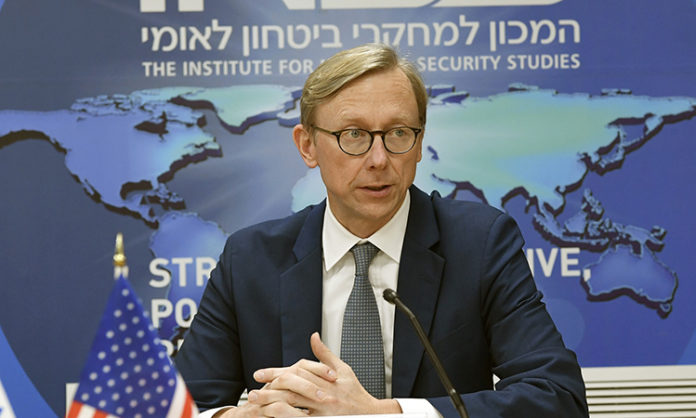 In Israel following visits to Saudi Arabia, the United Arab Emirates and Bahrain, where he received support for extending the embargo, Hook said that Israel and the United States “see eye to eye” on the issue and highlighted Iran’s belligerent goals in the region.

The arms embargo, established under U.N. Security Council Resolution 2231, is first of the so-called “sunset provisions” in the 2015 Joint Comprehensive Plan of Action nuclear deal, and is set to expire on October 18.

“In four short months, Iran will be able to freely import fighter jets, attack helicopters, warships, submarines, large-caliber artillery systems and missiles of certain ranges,” said Hook. “Iran will then be in a position to export these weapons and their technologies to their proxies, such as Hezbollah, Palestine Islamic Jihad, Hamas, Shia militia groups in Iraq, Syria militant networks in Bahrain and to the Houthis in Yemen.”

This, said Hook, represented a threat to Israel’s security.

“The last thing that this region needs is more Iranian weapons,” he said. “This is a threat to Israel’s security because no country sponsors more terrorism and anti-Semitism in the world than the Islamic Republic of Iran.”

Hook said on June 16 that the U.S. administration wants the arms embargo to be extended indefinitely.

Netanyahu expressed his thanks to Hook for the Trump administration’s actions on the Iran front, saying that most of the world was doing nothing about Tehran’s “rampant aggression,” or worse, actively colluding with it.

“You’ve been the point man for [U.S.] President [Donald] Trump’s campaign of maximum pressure on Iran,” Netanyahu told Hook, according to a statement from the Prime Minister’s Office.

“Iran denies access to the IAEA inspectors to important sites, some of which we have uncovered through our own activity. It continues its rampant aggression across the Middle East and beyond. It arms, trains, finances and dispatches terrorists. Iran is doing all that and most of the international community is doing nothing in the face of it. And worse than nothing, many countries collude in this aggression. So I want to thank President Trump. We expressed our appreciation to what he and your administration is doing.”