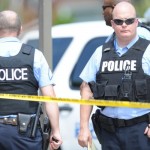 Loosen your deadbolts, Americans. According to new statistics from the FBI, violence crime decreased 4.4 percent in 2013, putting it at the lowest level since 1978. There were an estimated 1.1 million violent crimes reported last year, compared to 1.2 million the year before.

All violent crimes dropped, including murder and non-negligent manslaughter, which fell to levels not seen since 1968.

The largest percentage of violent crimes were aggravated assaults. The drop in crime also coincides with a declining prison population. Read more at The Chicago Tribune.