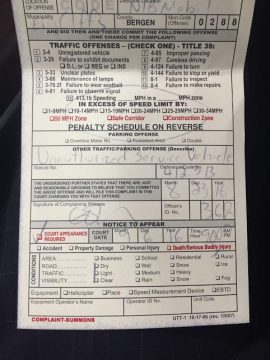 JP UPDATES reports: A 36-year-old Chaveirim volunteer from Brooklyn was issued a summons for helping a man fix a flat tire on the Palisades Interstate Parkway Tuesday night. The volunteer, who asked to remain anonymous, said he was treated poorly by a police officer, whom he believes ticketed him because of his religion.

“I was with two other men at the mobile gas station around 10:00 o’clock Tuseday night to help a man with a flat tire, when the officer form the Parkway police showed up and yelled in a nasty way,” the volunteer told JP.

According to the volunteer, the officer demanded to see “registration and license from all of you.”

“We tried to explain to the officer that we are just here helping a friend, but he didn’t want to listen,” the volunteer said. “He said law is law, and you can’t service vehicles on the Palisades Parkway.”

The allegations against the officer are being investigated by Internal Affairs, Michael Coppola, the Chief of Palisades Interstate Parkway Police Department, told JP.

“For various reasons such as insurance, training, capabilities, accessibility to the property, and several other factors, people who conduct purposeful activities such as this must be clearly understood, reviewed and potentially required to be contracted with the Commission,” Coppola said.

“The summons was issued for these circumstances involving specific activities at the site.”