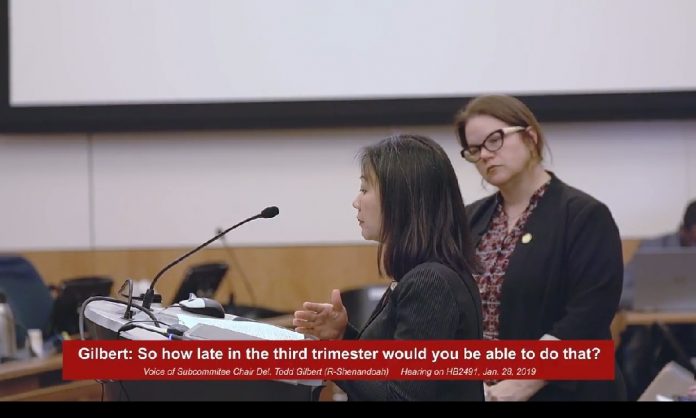 Virginia Del. Kathy Tran said Thursday that she “misspoke” during a legislative hearing earlier this week about a bill that would have loosened restrictions on late-term abortions.

Her comments, which were circulated by Republicans and went viral on social media, have sparked death threats and an intense backlash that includes GOP politicians such as President Donald Trump.

“I wish that I was quicker on my feet, and I wish that I was able to be more agile in that moment,” Tran, 41, a first-term Democrat from Fairfax County, said Thursday in a telephone interview. “And I misspoke, and I really regret that.”

When she was asked by a Republican lawmaker during the hearing whether the bill would allow an abortion to occur when a woman is in labor and about to give birth, Tran said yes.

The edited video of Tran’s testimony led some on Twitter to call Tran a “baby killer” or “a demonic creature.” Trump also weighed in, saying he had seen the video, and called Tran’s testimony “terrible.”

“Do you remember when I said Hillary Clinton was willing to rip the baby out of the womb?” Trump told the Daily Caller Wednesday. “That’s what it is. That’s what they’re doing.”

Tran said she and her family have received death threats through telephone messages, email and social media, leading to extra police protection for her at the state Capitol in Richmond, and for her family in West Springfield.

She declined to discuss specific details about the threats, but she said “some of them were credible,” prompting “an extra set of eyes” from police. She said she has tried to explain the situation over the past two days to her three older children, who are in elementary school.

“It’s a very tough conversation to have with your little ones about how they need to be safe and watch out for themselves, and that it’s OK to ask for help,” Tran said. “I love my kids dearly. They are my world, and their safety is my No. 1 priority.”

The intensity of the backlash moved one of the bill’s 22 Democratic co-sponsors to back away from the legislation, even though it had already been tabled in committee on Monday, and was identical to bills that had been proposed in the General Assembly and failed in past years.

“I vaguely remember signing on to this, and I did this in solidarity with my colleague and as a symbolic gesture for a woman’s right to choose,” Del. Dawn Adams, D-Richmond, wrote in a letter to constituents. “I am sorry that I did not exercise due diligence before this explosion of attention.”

Northam, a pediatric neurologist, was asked about the issue in a radio interview and gave an answer about prognosis and medical treatment that Republicans later used to suggest he favored killing live babies.

The procedures are “done in cases where there may be severe deformities,” Northam said in a WTOP radio interview. “There may be a fetus that’s not viable. So in this particular example, if a mother’s in labor, I can tell you exactly what would happen. The infant would be delivered, the infant would be kept comfortable, the infant would be resuscitated if that’s what the mother and the family desired. And then a discussion would ensue between the physicians and the mother.”

Late-term abortions are already permitted under Virginia law when the mother’s life or health would be “substantially and irredeemably” harmed by continuing a pregnancy, as certified by three physicians.

There is no time limit on third-trimester abortions; the procedure may take up until delivery.

Tran’s bill would have removed the phrase “substantially and irredeemably” when it comes to defining the risk a mother would face by continuing the pregnancy. It also would have required just one physician to certify the need for the procedure, instead of three. And it would have allowed second-trimester abortions to be performed in a clinic, instead of a hospital.