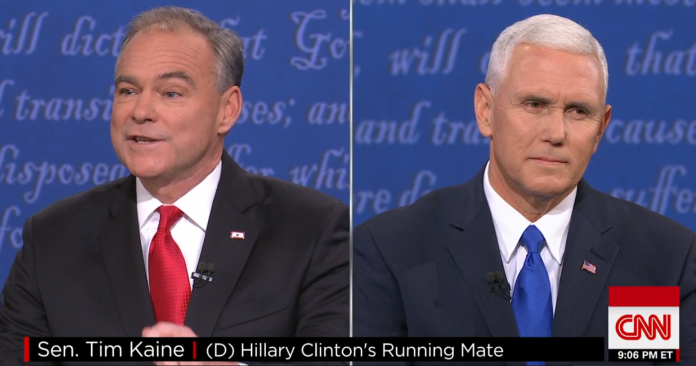 One week after Hillary Clinton and Donald Trump met for the most-watched presidential debate in television history, early Nielsen ratings numbers show Tuesday night’s vice-presidential sit-down saw a drop in viewers from the previous two cycles. Total ratings for the debate between Tim Kaine and Mike Pence are expected to fall somewhere in the 40-50 million range, according to an analysis by CNN.

Across the four major broadcast networks and three big cable news channels, the total was approximately 36 million viewers. That is not only far fewer than the 84 million viewers who tuned in to see Clinton and Trump, but also less than the 51.4 million who watched Vice President Joe Biden debate Rep. Paul Ryan in 2012. Four years before that, the fascination surrounding Sarah Palin made her showdown with Biden the most-watched VP debate in history, at 69.9 million viewers. Even the 2004 debate between John Edwards and Dick Cheney was seen by around 44 million people, making this year’s event the lowest-rated VP debate since 2000 when just 29 million tuned in to watch Cheney and Joe Lieberman. READ MORE AT CNN.