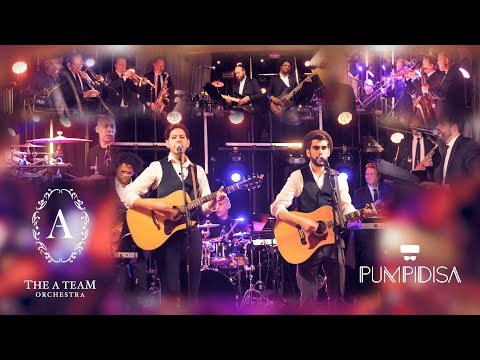 Music was always something we connected with, going back to when we were younger. Tzvi Levin of Pumpidisa befriended Yitzy Schwartz of The A Team 15+ years ago Upstate NY. As teenagers we spent our summers in the Catskill Mountains. This was the most exciting time of year where we would spend long nights together playing music in various abandoned locations such as the Raleigh Hotel concert hall, Reservoirs, Forests and under the famous 4 Corners Bridge down by the waterfall.
We even recall the time we got kicked out of an old long closed down jail in Monticello area. Things were starting to get a bit energetic. There were about 30 of us. It was about an hour and half before sunrise Thursday night Parshas Korach 2004, Yitzy had just begun Carlebach’s Esa Einai and before we knew it the Sheriff came bustling in with loud whistles ordering us to stand against the wall with our hands up. Tzvi then stepped forward and explained to the officer that we were just looking to sing some songs of gratitude to our Creator, and in our Bungalow Colonies we weren’t able to make noise past 11pm. The officers then agreed to let us stay another half hour. They were listening in awe and asked us to invite them to our next gathering.

This song was performed at the Scheiner Sheva Brachos. We felt it would be appropriate, whereas Mr. Scheiner has been an integral part of the Hachnasos Orchim in Ukraine by Reb Nachman of Uman.

This song was composed by Shlomo Ettlinger CPA who has been a humble follower of the Breslov path for close to 15 years. The Middle Eastern scale is perhaps influenced by living many years in the Old City, Jerusalem.