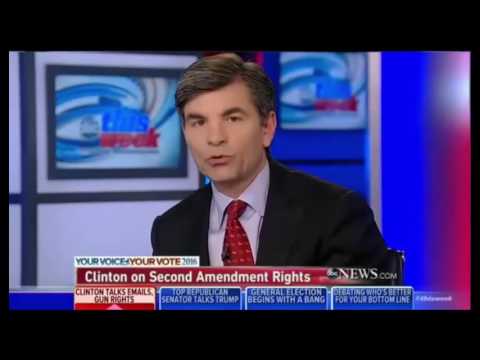 Hillary Clinton declined to say Sunday whether she believes in a constitutional right to bear arms, possibly opening the door to a fresh round of attacks from Donald Trump, who has already accused the likely Democratic presidential nominee of wanting to “abolish” the Second Amendment.

In an interview on ABC’s “This Week,” Clinton deflected twice when asked whether she agrees with the Supreme Court’s interpretation of the Second Amendment. The court ruled in 2008 that the Constitution affords private citizens the right to keep firearms in their homes and that such possession need not be connected to military service.

The wording of the Second Amendment has long made the extent of gun ownership rights a point of contention:

“A well regulated militia, being necessary to the security of a free state, the right of the people to keep and bear arms, shall not be infringed.”

Questioned by George Stephanopoulos about her view of the amendment, Clinton talked about a “nuanced reading” and emphasized her belief in the rights of local, state and federal governments to regulate gun ownership. Stephanopoulos, formerly a top aide to President Bill Clinton, wasn’t satisfied by the response.

“That’s not what I asked,” he replied.

CLINTON: I think that for most of our history there was a nuanced reading of the Second Amendment until the decision by the late Justice (Antonin) Scalia. And there was no argument until then that localities and states and the federal government had a right – as we do with every amendment – to impose reasonable regulations. So I believe we can have common-sense gun safety measures consistent with the Second Amendment. And, in fact, what I have proposed is supported by 90 percent of the American people and more than 75 percent of responsible gun owners. So that is exactly what I think is constitutionally permissible and, once again, you have Donald Trump just making outright fabrications, accusing me of something that is absolutely untrue. But I’m going to continue to speak out for comprehensive background checks; closing the gun show loophole; closing the online loophole; closing the so-called Charleston loophole; reversing the bill that Sen. (Bernie) Sanders voted for and I voted against, giving immunity from liability to gun makers and sellers. I think all of that can and should be done, and it is, in my view, consistent with the Constitution.

STEPHANOPOULOS: And, and the Heller decision also says there can be some restrictions. But that’s not what I asked. I said, do you believe their conclusion that the right to bear arms is a constitutional right?

CLINTON: If it is a constitutional right, then it – like every other constitutional right – is subject to reasonable regulations. And what people have done with that decision is to take it as far as they possible can and reject what has been our history from the very beginning of the republic, where some of the earliest laws that were passed were about firearms. So I think it’s important to recognize that reasonable people can say, as I do, responsible gun owners have a right. I have no objection to that. But the rest of the American public has a right to require certain kinds of regulatory, responsible actions to protect everyone else.