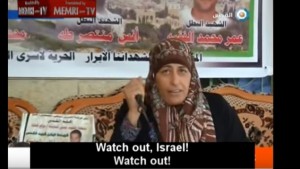 [Video below.] The mother of a Palestinian terrorist who was killed while perpetrating a terror attack aboard a Yerushalayim bus earlier this month said she hoped her other sons would follow in his footsteps, and, with knife in hand, announced her intention to carry out her own attack against Israelis.

During an interview with the Lebanese Al-Quds TV channel, Umm Muhammad Shamasne said the family was proud of her son, who was “martyred for the sake of Al-Aqsa,” and said she was only angry that “he did not take me to be martyred with him.”

“We regret nothing, we are proud of him,” Shamasne said, acknowledging that the family had been aware of Muhammad’s intentions to carry out an attack against Israelis.

“Let Mu’tasim and Yousuf be martyred as well. It is all a sacrifice for the sake of Al-Aqsa and Palestine,” she said.

After offering the interviewer candy to celebrate her son’s martyrdom, Shamasne pulled out a knife concealed beneath her clothes and said, while making stabbing motions: “Watch out, Israel! Watch out!”

The journalist asked Shamasne to put the knife away, saying “such spectacles” were inappropriate for the television interview. “I understand the searing pain, the anger, and the tension, but we can’t have such things, if you’ll forgive me,” the reporter said, before turning the subject to home demolitions.

Shamasne appeared to be undeterred by Israel’s punitive measure of demolishing the homes of Palestinian terrorists.

“There’s no need for me to say any more. My deeds will speak louder than words,” she concluded.

Shortly after 8 p.m. on October 12, 22-year-old Muhammad Shamasne boarded bus No. 185 near the entrance to Jerusalem and stabbed a 19-year-old Israel Defense Forces soldier and unsuccessfully tried to grab his gun. The soldier and a civilian were lightly injured in the attack.

Shamasne was shot and killed by police while passengers were attempting to subdue him.

The October 22 interview was translated by the Middle East Media Research Institute, a US media watchdog group, and was uploaded on Monday.