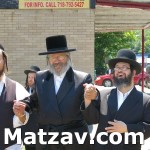 Rabbi Mordechai Jungreis, otherwise known as the Niklesburg Rebbe, is a man whose life mission is to bring warmth, love and compassion to every Jew. Hundreds of older boys know the Rebbe for his Kiruv and warmth that they experience from him in his Shul on 4912-16th Ave in Borough Park, while little boys know him as the pre1a Rebbe of Chaim Berlin. Now Rabbi Jungreis is known by yet another name: the Woodbourne Rebbe. How did this happen? About 10 years ago the Rebbe had a vision to create a place where all Yidden, regardless of whether they are Chasidic, Litvish, Modern or even off the derech (not frum), could come to feel accepted, comfortable, relaxed and feel closer to Hashem. One day while driving through upstate New York Rabbi Jungreis saw that place and it was Bnei Yisroel, or to many people the Woodbourne Shul.

The Shul itself was built in 1920 and is listed in the U.S. National Register of Historic Places. When the Rebbe found the Shul it was in decline, not in use and was just that, a historic relic of the past. The Rebbe wanted the Shul not to be a museum but to live up to its name “Bnei Yisroel,” a place where all of Klal Yisroel could daven, come together and come closer to Hashem.

When the Rebbe contacted the Board, at first it was reluctant to sell the Shul. However after years of negotiating Rabbi Jungreis was able to convince the Board to sell it to him for $120,000. Finally in 2010 the Rebbes’ dream came true. As soon as the Shul was purchased Rabbi Jungreis put his full force behind this project. It became his life goal to make this Shul a Shul for all Yidden to daven, learn, eat, hang out and feel accepted. The success of the Shul became the Rebbe’s drive. One of the jokes about the Rebbe is that he has a “Rebbe’s Chair” in the Shul but it is never used, since the Rebbe is never seen sitting. The Rebbe is constantly running around, greeting people, hugging people, answering phone calls, running from one place to another place, making sure the food is stocked, a Minyan is starting on time, someone is getting an Aliyah or the hot water urn doesn’t need more water.

The Shul started small in 2010 with maybe a couple of thousand people coming throughout the summer. By the next summer the amount of people had tripled. Last year the Shul had about 10,000 people come in every week. This summer (2015), the Shul has seen its highest volume yet, with over 120,000 people attending the Shul.

The Shul is a Minyan factory with Minyanim going on hroughout the day. Minyanim start every day from 6:15 A.M. with a new one starting every 10 minutes. Mincha starts at 5:00 P.M. and you can find a Maariv at midnight with multiple minyanim going on throughout the Shul. The Shul right now can have four minyanim simultaneously: one downstairs, one upstairs, another in front of the Shul and another in back of the Shul. People can choose to daven upstairs where they can see the original 1920 architecture of the Shul with glass stained windows and high ceilings, but with the modern conveniences of air conditioning and new electric lighting. Some people love to daven in the back of the Shul where they can daven in the forest-like atmosphere, some people wrapping their talis around their head and walking amongst the trees pouring their hearts out to Hashem.

However, that is not all. For those who are hungry there is always a large variety of fresh food to eat at the table. There is herring, but just not one type of herring: there is matjas herring, pickled herring, honey mustard herring, spicy herring and pickled herring. There are so many dips and spreads from cream cheese to tomato dip, dill dip, garlic dip or vegetable dip. Bagels, rolls and fresh bread are available daily. None of the food is ever stale or old, as Rabbi Jungreis always insists that all the food served be fresh. Besides that there is a constant flow of coffee, cookies and licorice for the kinderlach who usually come to the Shul with their dads, so that the little ones are always asking their tottys to go back to “the Shul with all the nosh.”

Not only does the Shul offer food, but it has a parking lot next to it so people don’t have to worry about parking. Unlike some other minyanim where you can circle for 20 minutes before you find a place, you can park right next to it and within a minute or two you are already putting on your tallis and teffilin.

Furthermore, the Shul has 31 kollel people learning every morning, some of them traveling from as far as 30 miles away so that they can be part of the kollel. At night shiurim are given, notably Monday and Thursday nights by Rav Moshe Meir Weiss, Rav of the Agudah in Staten Island. During the summer, Gedolim, Rosh Yeshivot, Rebbes come in to give divrei Torah, chizuk and support for the Shul and the Rebbe. Just to name a few: the Rosh Yeshiva of Torah Temima, Rav Chaim Flohr, the Galanter Rebbe and Harav Bick – The Mezhbizher Rav.

The Shul is also open on Shabbos, where every Shabbos it hosts a huge Kiddush from chulent to kugel to gefilte fish, cookies, cake, herring, soda and grape juice. Every Shabbos the minyan has over 100 people. A few Shabbosos ago those at the Shul had the zechiah of having the Biale Rebbe, who walked a couple of miles just to experience a Shabbos in the Shul. He spoke in the Shul giving the tzibur divrei Torah and chizuk, telling the tzibur that the Niklesburg Rebbes loves every Jew and makes them all feel special.

However, this not the main reason that people go there. While it is true that it offers four simultaneous minyanim throughout the day, offering fresh food of different varieties, a parking lot and shiurim, the main reason people come here is that they know in this Shul, no matter how they look, they can come here and feel comfortable, respected and know that no one will look down on them. Many people come for the warmth that the Niklesburg Rebbe offers to anyone who comes to the Woodbourne Shul. People come to the Shul depressed, upset, nervous, mamesh lost, but when they see the Rebbe a beam of happiness and serenity comes over them. Rabbi Jungreis will walk over to them shake their hand, give them a hug, sit them down by the food table and tell them to relax and eat something. One person from Monroe told me that he was extremely depressed and would come all the way to the Woodbourne Shul, a 48 mile drive, just to get away and sit in the special, holy atmosphere of the Shul. Another person told me that he came all the way from Monsey so that instead of coming home from work to his family all angry and upset, he could come here first, calm down and then come home with a huge smile on his face to properly greet his family. A 103-year-old man, Harav Gruss, came to the Woodbourne Shul a couple of times for Mincha and Maariv. The Rebbe gave him his own place just to sit down so he could daven with respect and comfort. HaRav Gruss said that it was worth it for him to come just so he could feel respected and loved.

Many people come especially to get brachos and aitzos from Rabbi Jungreis for themselves and their children. In fact, it is not surprising to see the Rebbe standing there and blessing 3 different children at once. Whether they be Chasidic children, Litvish children, modern children or even not religious children, the Rebbe will bless them with his full heart and warmth. I have also seen adults come in and request brachos from the Rebbe.

People that I spoke to told me that although they have davened in many different minyanim, they love to come here, sometimes travelling out of the way to daven here just because they feel that here their tefillos and kavanah is better. They feel that when you daven here your tefillos go straight to Hashem.

The Rebbes motto is “This is not my Shul, but everyone’s Shul.” When asked if he was going to change the original name of the Shul “Bnei Yisroel,” he said “No. That is the perfect name for it, because this Shul is ‘All of Bnei Yisroel’s Shul.’”

This year the Shul will be open throughout selichos, chol hamoed and Hoshanah Rabbah. Due to the popularity last year, people have asked that the Shul remain open even for these days as they say that davening in this Shul during those holy days they feel Hashem accepting their tefillos.

While Rabbi Jungreis will never ask anyone for money or even make one appeal, the Shul has a huge budget with costs ranging from the insurance, water bill, gas/heat and electric bill, Kollel expenses, air conditioning, maintenance, Shabbos Kiddush, food and beverages. This year the Shul had just for Thursday night 40 overnight kugels and 25 crock pots of chulent! The Shul came into this year’s vacation season still owing $30,000 from last year. Anyone who wants can donate by sending a check to: Congregation Niklesburg P.O. Box 101 Woodbourne, NY 12788-0101 or paying by credit card on the website thewoodbourneShul.org.