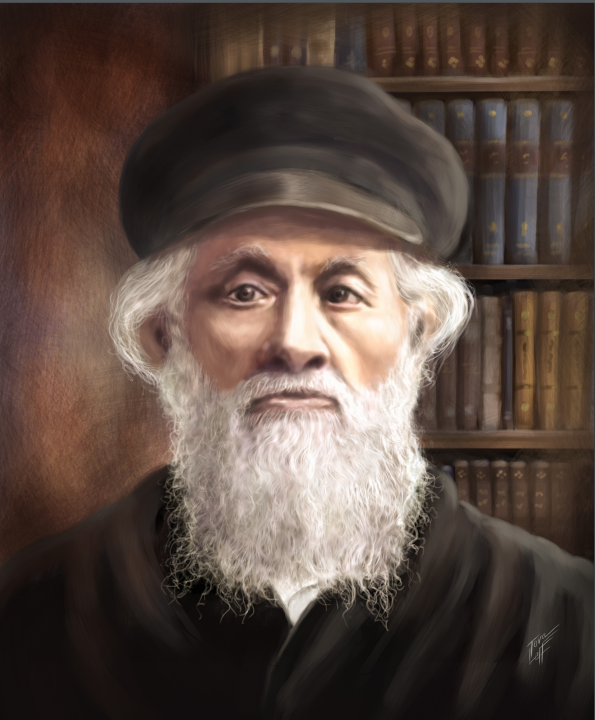 Rav Shlomo Kanievsky is a scion of Torah royalty, tracing his lineage back to renowned spiritual giants. Rav Shlomo, who is a son of Rav Chaim Kanievsky Shlit”a  and a grandson of Rav Yosef Shalom Elyashiv zt”l, is named for his great-great-grandfather, Rav Shlomo Elyashiv zt”l, known as the Leshem for his written work titled Leshem Shevo Ve’achlamah.

Born in Zager, northern Lithuania, on leil Shabbos, 12 Teves 5602/1841, the Leshem was a son of Rav Chayim Chaykil Elyashiv.

It is said that during her pregnancy, the Leshem’s mother constantly saw a bright light in front of her, indicating that she would give birth to a baby who would grow to become a holy and righteous individual.

Already in his youth, the Leshem was recognized for his brilliance and remarkable memory. He studied Torah with his father and after his bar mitzvah joined the yeshiva in Minsk, where his days and nights were spent poring through sifrei kodesh.

The Leshem married Bas Sheva Esther, a daughter of Rav Dovid Fein of Shavel, Lithuania, where the young couple settled. His wife carried the burden of earning a living so that her husband could immerse himself in Torah learning.

The Leshem, accompanied by his son, Yitzchok, subsequently traveled to the city of Telz, then a locale that was home to many talmidei chachomim. The Leshem spent approximately ten years in Telz, learning Torah continuously. After completing Talmud Bavi and Talmud Yerushalmi, along with Rishonim, Acharonim and seforim of leading poskim, the Leshem mastered many sifrei mussar and then devoted himself to the study of Kabbolah, such as Zohar, Sefer Yetzirah, and the writings of the Arizal, as well as the sifrei HaGra. He mastered the revealed Torah and the mystical portions of Torah, becoming venerated by great talmidei chachomim for the breadth of his knowledge.

The Leshem began writing his chiddushei Torah with the assistance of his son. Fascinatingly, the Leshem himself spent time producing and preparing the ink and quill that he utilized to write his chiddushim to ensure that his chiddushei Torah were written with the greatest kedusha and taharah. Because of the difficulty that the Leshem experiencing when writing, as his hand was weak, he wrote quickly in order to expedite the process.

The Leshem ultimately moved back to Shavel, where he sat all day, garbed in tallis and tefillin, learning Torah.

At that time, gedolei Torah asked the Leshem to devote time and effort toward the editing, organization and publication of the writings of the Vilna Gaon, the Ramchal and Rav Yitzchok Eizik Chover.

Despite not holding a public position at any juncture, the Leshem’s greatness was well-known, and he formed a connection with some of the greatest Torah giants of the time, including Rav Yisroel Salanter, the Chofetz Chaim, the Alter of Novardok, Rav Itzele Peterburger, Rav Yosef Leib Bloch of Telz, Rav Avrohom Yitzchok Kook and Rav Elya Lopian.

It is related that Rav Elya Dushnitzer, a great tzaddik, was sent a message by the Chofetz Chaim, who instructed him, upon traveling to the town of Shavel, to make sure to visit Rav Shlomo Elyashiv, “because while it is still possible to see him in this world, in the next world you won’t be able to get to his doorpost [where he will be set apart due to his righteousness].”

During his last period in Shavel, many of the Leshem’s writings were destroyed in a conflagration in his home. Within a year of the blaze, the residents of the city were driven out, given only 15 hours to vacate. The Leshem was in his 70s at the time.

The Leshem moved to the Russian town of Homel, where the rov was his son-in-law, Rav Avrohom Orener (who later adopted his father-in-law’s surname of Elyashiv). For the next few years, the Leshem relocated numerous times, until 1922, when he, together with his daughter, his son-in-law, and their eleven-year-old son, Yosef Shalom, relocated to Eretz Yisroel. The paperwork needed for their immigration was procured with the assistance of Rav Avrohom Yitzchok Kook, chief rabbi of Eretz Yisroel, and Rav Yitzchok Isaac Herzog, then rov of Ireland.

Arriving in Yerushalayim during the month of Adar, the Leshem was greeted at a kabbolas ponim attended by the rabbonim of the city, some of whom recited the brocha of Shehecheyanu and others who said the brocha of “shecholak meichochmaso l’yerei’av,” recognizing the Leshem’s all-encompassing knowledge of Torah.

The Leshem resided in the Botei Nathan neighborhood near Meah Shearim, where he was frequently visited by the gedolei Yerushalayim.

The last day on this world, the Leshem was brought a copy of his sefer, Haklolim, which had just arrived from the print house. The Leshem held the sefer close to his heart, kissing it as tears fell from his eyes. Those present blessed him, saying that he should “merit to publish the rest of his writings.” The Leshem responded, “Boruch Hashem that I’ve merited what I have this far – and that is enough!”

The Leshem passed away in Yerushalayim on leil Shabbos of Parshas Vayeira, after midnight. The date was 27 Adar, 1926. He was 84 years old.

That Motzoei Shabbos, a crowd gathered at his home to pay their last respects, and divrei hesped were delivered by his son-in-law, Rav Avrohom. When the aron was taken out to the streets of the city, a hesped was delivered by Rav Avrohom Yitzchok Kook. Rav Aryeh Levin later testified that during the kevurah on Har Hazeisim, the sky lit up with the appearance of a rainbow, to the astonishment of all, remaining that way until the conclusion of the burial.

Stories abound of those who have experienced personal yeshuos after davening at the Leshem’s kever on Har Hazeisim, no doubt due to the zechuyos amassed during a lifetime of avodas Hashem and limud haTorah at the most exalted levels.

The Leshem merited for a number of his descendants to be named for him. His great-granddaughter, Rebbetzin Batsheva Kanievsky a”h, once remarked that all the ainiklach of the Leshem are wonderful, but the “Shlomos” are unique, for they are named after their legendary zaide. The velt appends the following: “While all the ‘Shlomos’ are indeed unique, there is one who is simply extraordinary, and that is Rav Shlomo Kanievsky.”

Indeed, Rav Shlomo, with his remarkable yedios haTorah, his aidelkeit and the manner in which he reflects the Torah majesty of his father, is a gadol baTorah of distinctive stature.