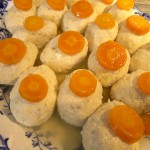 The newest trove of more than 7,000 of Hillary Clinton’s emails were released Monday night by the State Department, showcasing more of the mundane political notes and scheduling requests that have made up earlier releases, CNN reports.

That’s despite 125 of those emails — which weren’t classified at the time — being retroactively classified before they were released. All or portions of some unclassified emails are redacted, too, CNN adds.

One email from Clinton contains the subject line “Gefilte fish.”

The entire content of the email: “Where are we on this?”

It’s not as bizarre as it sounds. The message is related to nine containers of the gefilte fish that were supposed to be shipped from Illinois to Israel but had become embroiled in a trade dispute.

Rep. Donald Manzullo, an Illinois Republican, had asked Clinton at a House Foreign Affairs Committee meeting to look into it. Meeting Israeli Defense Minister Ehud Barak, Clinton joked that despite the intractable problems the United States and Israel face, “This one we might be able to solve.”

Michael Oren, the former Israeli ambassador to the United States, wrote in his memoir as follows:

“America signed its first-ever free-trade agreement with Israel back in 1985, but the treaty exempted certain Israeli products liable to be eradicated by their cheaper American counterparts. Apples, avocados, and oranges fell into this category, and, so, too, did the carp cultivated by Galilean farmers. Which is why four hundred thousand pounds of the frozen fish were denied entry into the Promised Land.

“Still, in the view of the possible diplomatic damage, I thought Israel should make this one exception, and told that to the Ministers of Trade and Finance. … ‘You think finding Middle East peace is hard,’ Secretary of State Clinton blithely told reporters. ‘I’m dealing with carp!’ Netanyahu called to question me, ‘What’s all this carp stuff?'”