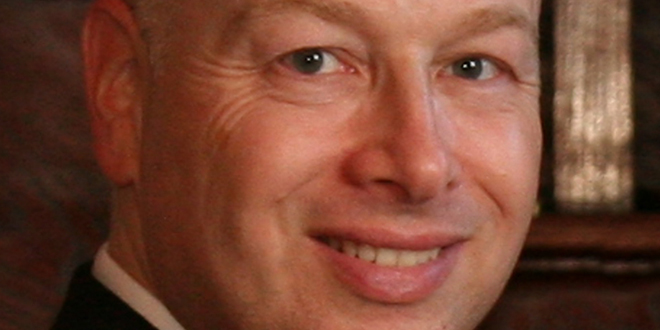 Many hopeful executives and celebrities alike have trembled in fear in the boardroom before Donald Trump and his now-famous catchphrase, “You’re fired!”

The lucky few who hear “You’re hired!” get an opportunity of a lifetime to work with the larger-than-life mogul and personality who heads The Trump Organization, a conglomerate that owns and operates hotels, resorts, office buildings, golf courses and residential towers across the world.

Yeshiva University’s own Jason Dov Greenblatt ’85YUHS, ’89YC serves as executive vice president and general counsel for The Trump Organization, a position he has held for the past 16 years. Greenblatt, who arrived at Trump after working for a large law firm, said of his prior work, “The firm and my colleagues there were good to work with, but the work was simply not challenging or exciting enough for my entrepreneurial nature. When a headhunter called me with a job for a ‘major real estate developer,’ he declined to disclose who it was. Though I usually ignored those kinds of cold calls, I decided to meet with him. It was a particularly boring day at work for me, I recall.”

Greenblatt found himself being interviewed by Trump’s former general counsel along with Trump himself, and was soon offered the job. “I learned from this experience to explore all opportunities so there’s no fear of missing out,” said Greenblatt. “I almost didn’t meet with that headhunter, which would have been a big mistake, because the meeting led me to this challenging and varied job that I absolutely love.”

Greenblatt, originally from Forest Hills, NY, attended Yeshiva University’s Marsha Stern Talmudical Academy before entering Yeshiva College through its early admissions program. “I am a firm believer in the philosophy of Torah Umadda and there was, and still is, no other school or institution that can instill and implement this philosophy as well as YU can,” said Greenblatt. “At Yeshiva, I enjoyed being surrounded by a wonderful chevra [group] of like-minded, intellectually curious people who served as great inspiration for me.”

Greenblatt majored in English literature and took several science courses since he was considering pursuing medical school, but he decided that his talents better served the legal field. “I haven’t looked back since!” he said. “Those long days of academic classes going late into the night and then studying afterward, while challenging then, certainly prepared me for law school, for my early years working for a big firm and now for The Trump Organization.”

A typical day for Greenblatt at Trump is filled with multi-tasking, reviewing documents, negotiating and working on a host of interesting and unusual deals, ranging from complex real estate matters to entertainment and hospitality. “Like every job, each day does have its more mundane tasks, but most of my day requires heavy thinking, creativity and the need to always be on my toes,” remarked Greenblatt. “I love working with Donald and his children, Donald Jr., Ivanka and Eric, because they are all passionate about what they do, talented, extremely bright and very hard-working. They are a lot of fun to work with and know how to get things done.”

Greenblatt also said he could not ask for a better job as an observant Jew. “Donald and his family have always been extremely respectful of my observance,” he said. “I have sometimes had to walk out on deals valued in the hundreds of millions of dollars because of Shabbos and holidays, and Donald has always said to me, ‘go home and pray, we will pick it up after the holiday.’ He is a true mensch about it and I believe that for a person of his stature to act this way is really incredible.”

He continued, “Having said that, I don’t take his respect lightly. I do whatever it takes to limit the times when Shabbos or holidays become an issue, and I have slept in the office for two nights in a row in advance of a holiday to avoid situations where I need to leave a deal unfinished. Donald doesn’t ask me to do this, but my feeling is, if he and his family are so respectful, I owe them the same respect in return.”

This is a lesson, Greenblatt feels, that is very important to teach young observant Jewish men and women entering the work force. “Some people think they can have it both ways—regular hours and then leave for Shabbos and holidays,” he said, “but most jobs don’t work that way. We should be cognizant of that, appreciate the respect we get from others, and not abuse it.”

Greenblatt also has more specific career advice for YU students wishing to pursue a legal career. “Similar to the guidance Donald gives others, my advice is to first make sure—before you worry about the market—that you love and are passionate about a law career,” he said. “If you settle for something less, I think Donald is also correct when he says you likely won’t be as good at what you do.

“Once you’ve decided that law school is indeed for you, recognize that the dynamics have shifted and the money and advancement opportunities may not be the same as they once were,” Greenblatt continued. “There is no doubt that the market for legal jobs is tight, but I think that’s true for a lot of fields now due to the continuing uncertainty in the economy. Like virtually all businesses, the legal profession is cyclical. I think as the economy continues to improve, the legal market will as well. Don’t forget that law school can be a great stepping stone into another career, even if you don’t end up practicing law.”

Greenblatt lives in Teaneck with his family, of whom he is extremely proud: his wife, Naomi, a psychiatrist who specializes in women’s mental health, and their six children: Noah, Julia, and Anna, 13-year old triplets, Sophia, 9, Avery, 6, and Vera, 15 months.

In advance of their b’nai mitzvah, the triplets, along with two of their younger siblings, formed their own organization, Triplets for a Cause, in which they undertake various chesed [deeds of kindness] projects. They attributed their recognition of the importance of giving to others from their parents, and indeed, despite Greenblatt’s long work days, he makes time to participate in communal activities.

He recently spoke to teens as part of New Jersey NCSY’s Latte and Learning program. At the time, Rabbi Dovid Cofnas, NJ NCSY’s director of development, said, “Mr. Greenblatt feels very strongly about upholding traditional Jewish values and wants to transmit them to the next generation. Hearing from a successful lawyer who makes Shabbat and Jewish holidays a top priority has a certain ‘wow’ appeal. Teenagers love that—he makes it cool to be observant. His talk had a great impact.”

Someone else impressed by Greenblatt’s adherence to his faith, as well as his excellence in the legal field? The Donald himself. “Jason Greenblatt has worked for me for 16 years and he has never been less than brilliant,” Trump said. “He’s accomplished and adept professionally and his dedication extends not only to his work, but to his family. His faith runs deep, which is apparent in all he does. Yeshiva should be very proud that he is an alumnus—he’s solid gold and a total winner!”