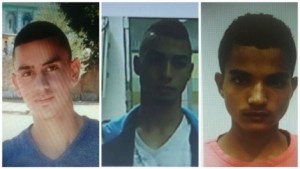 Four Palestinian youths, including two minors, were arrested on suspicion of having carried out a rock-throwing attack on a car in Yerushalayim on Rosh Hashanah two weeks ago which led to the death of its driver, Alexander Levlovitz.

According to a statement on Motzoei Shabbos by the Shin Bet, the four are residents of the East Jerusalem neighborhood of Sur Baher.

They were identified by the Shin Bet as Muhammad Salah Muhammad Abu Kaf, 18, Walid Fares Mustafa Atrash, 18, and Abed Muhammad Abed Rabo Dawiat, 17. The fourth suspect’s identity was not revealed.

During their interrogation, according to the Shin Bet, the four admitted to setting out on the evening of Rosh Hashanah to attack Israeli cars.

Dawiat, according to the investigation, threw the stone that hit Levlovitz’s car, causing him to lose control of his vehicle and crash into a pole. He died of his wounds the next morning.

Two women who were in the car with Levlovitz, 64, were lightly wounded.

The Shin Bet said Dawiat told investigators that he carried out the attack in the name of terror group Hamas and that the four threw stones at several Israeli cars before hitting Levlovitz’s.

The four then fled the scene, meeting later to coordinate their version of events in case they were caught, according to the Shin Bet.

The incident — amid a surge of rock-throwing attacks on the Har Habayis and elsewehere  — led Prime Minister Bibi Netanyahu to call an emergency meeting in which a new series of measures against rock-throwers were announced.

The security cabinet on Thursday voted unanimously in favor of the new rules aimed at combating stone-throwing, including mandatory minimum sentences for those convicted of throwing rocks and firebombs, and an easing of the rules governing police use of live fire in rock-throwing incidents.