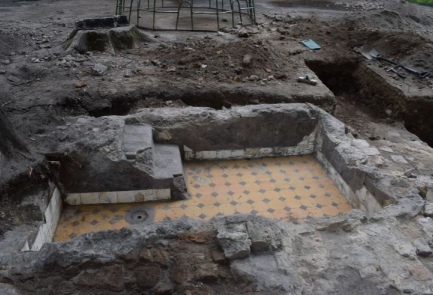 A team of Israeli, Lithuanian and American archaeologists has unearthed the remains of two mikvahs  used by congregants at the Great Synagogue in Vilna, which is the modern-day capital of Lithuania.

This synagogue, which was at heart of Vilna’s large Jewish community for hundreds of years, was completely destroyed in the Holocaust, but evidence of underground spaces discovered in a study carried out last year led to the excavation of the site and the exposure of the ritual baths.

The Great Synagogue of Vilna, built in the 17th century in Renaissance-Baroque style, was a large community center and a hub for Torah study. The facility included 12 different synagogues and study halls; mikvahs; the community council building; kosher meat stalls; and the school of famed Vilna Gaon.

During the Holocaust, Germans looted and burned the synagogue complex. Any remains were completely obliterated after the war by the Soviets, who built a modern school at the site.

The Israeli-Lithuanian-American team discovered the mikvahs in July. The sections of the ritual baths that the archaeologists uncovered date to the early 20th century, and feature tiled walls and floors, steps leading to a pool, and an auxiliary pool in which water is collected for the mikvah.

“These discoveries add a new dimension to the understanding of the daily lives of the Jews of Vilna, and will certainly provide a new focus for understanding the lost cultural heritage of the Jewish community of Vilna, the ‘Jerusalem of Lithuania,’” the researchers explained.