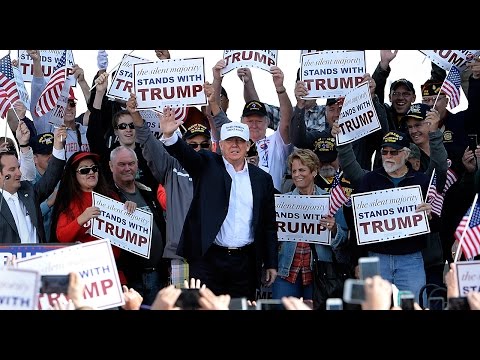 Donald Trump launched a fresh round of attacks on Hillary Clinton today over her use of a private email server while serving as secretary of state, using news that the FBI is renewing its probe to accuse her of “criminal and illegal conduct.”

“We never thought we were going to say thank you to Anthony Weiner,” Trump quipped at a campaign rally in Las Vegas. Several supporters chanted “Weiner! Weiner!” when Trump mentioned the disgraced ex-congressman, D-N.Y.

FBI Director James B. Comey reignited a political firestorm over the emails when he alerted select members of Congress on Friday that FBI officials had detected a batch of emails pertinent to the case during an “unrelated” investigation. Persons close to the situation have told The Washington Post that the emails were found on a computer belonging to Weiner, who is under investigation for allegedly exchanging lewd messages with a 15-year-old girl. Weiner is the estranged husband of top Clinton adviser Huma Abedin.

In his letter to Congress, Comey said that whether the emails provide any new information to the Clinton investigation had yet to be determined, but Democrats worry the news could sway the election.

Trump is already making a case of Clinton’s wrongdoing on the campaign trail.

“As you’ve heard it was just announced on Friday that the FBI is reopening their investigation into the criminal and illegal conduct of Hillary Clinton,” Trump said during his rally Sunday in Las Vegas. “Hillary has nobody but herself to blame for her mounting legal problems. Her criminal action was willful, deliberate, intentional and purposeful.”

Clinton on Sunday made no direct mention of the FBI controversy, but on several occasions she seemed to allude to it during campaign stops in Florida, a key battleground state.

“I want you to know, I am focused on one thing: you, the problems that keep you up at night,” Clinton said during an event in Wilton Manors, Florida. “There’s a lot of noise and distraction, but it really comes down to what kind of future we want.”

Trump’s campaign expressed optimism Sunday that they have “tremendous momentum” in the final days of the election, with national polls showing him and Hillary Clinton in a dead heat at the same time her team grapples with an announcement that the FBI is renewing a probe into her use of a private email server while at the State Department.

Trump bragged about his new strength in recent polls Sunday morning, despite repeatedly claiming in recent weeks that polls were “rigged” against him. The celebrity businessman also claimed, without evidence, that “Twitter, Google and Facebook are burying the FBI criminal investigation of Clinton.”

“We are now leading in many polls, and many of these were taken before the criminal investigation announcement on Friday – great in states!” Trump tweeted Sunday.

Florida is seen as a key battleground state, with an electoral college victory for Trump seen as being nearly impossible without him winning there. Trump, however, started the day in Nevada, where he stopped by a nondenominational church in Las Vegas, where he also held a rally.

Clinton also urged churchgoers in Florida on Sunday not to be “distracted by all the noise in the political environment.” During remarks to about 300 people at the Mount Olive Baptist Church in Fort Lauderdale, one of several planned stops for the day in the Miami area, Clinton made no mention of the renewed FBI scrutiny related to the private email server she used as secretary of state – but Clinton stressed the value of perseverance when confronting obstacles in life.

“Everyone – everyone – is knocked down in life,” Clinton told the predominantly black congregation. “And as my mother showed me and taught me, what matters is whether you get back up. And those of us who are people of faith know that getting back up is what we are called to do.”

Earlier Sunday, Clinton dropped in on an early voting brunch sponsored by two Democratic groups in Miami at Fado’s, an Irish pub.

“These last nine days we can really race to the finish line,” Clinton told a crowd of about 40 people, who she urged to help elect Democrats up and down the ballot.

“If any of you know anyone who is thinking about voting for Trump, I want you to stage an intervention,” Clinton added. “Because friends don’t let friends vote for Trump.”

The email controversy was the focal point of interviews with Trump and Clinton surrogates on the Sunday morning political shows.

Trump’s running mate, Indiana Gov. Mike Pence, said that he feels “tremendous momentum in this campaign” during an appearance on “Fox News Sunday” and said that Trump would likely inject more of his personal wealth into his campaign in the remaining days.

Clinton and other Democrats were hitting hard at Comey, attacking his announcement as inappropriate and unfair this close to Election Day.

Clinton’s running mate, Sen. Tim Kaine (Va.), called the FBI announcement “extremely puzzling” during an interview on ABC’s “This Week With George Stephanopoulos.” “Why would you release information that is so incomplete when you haven’t even seen the material yourself? Eleven days before an election, why would you talk about an ongoing investigation? I just have no way of understanding these actions. They’re completely unprecedented. And that’s why I think (Comey) owes the American public more information.”

On Saturday, Clinton demanded answers about what she suggested is a politically motivated renewal of the FBI inquiry into her use of a private email server at the State Department. As her campaign scrambled Saturday to respond to Comey’s decision to notify Congress about his decision, Clinton and her top aides characterized the action as inappropriate and irresponsible.

“It’s pretty strange to put something like that out with such little information right before an election,” Clinton said Saturday in Daytona Beach, Florida, as a supportive crowd cheered her. “In fact, it’s not just strange. It’s unprecedented, and it’s deeply troubling.”

The Democratic nominee’s strongly worded response to the new inquiry signaled a decision to fully go on the offense against Comey and confront the email issue and Republican attacks head-on.

Pence criticized Clinton and her allies for questioning Comey’s decision and motives during an appearance on CBS “Face the Nation” on Sunday, but he avoided answering questions about Trump’s own accusations of “corruption” against the FBI and the Justice Department in recent weeks.

“I think what you see here is an example of real leadership,” Pence said on “Fox News Sunday.”

“That’s because we thought the investigation never should have been closed. … It was just incomprehensible when the director of the FBI came out and literally indicted Hillary Clinton in the press and then said we’re not recommending that she be indicted.”

Until now, the issue of Clinton’s use of a private email server while serving as secretary of state seemed to be receding, and Clinton had sounded increasingly confident as she maintained a lead in most national polls over the past several weeks.

But polls had begun to tighten even before the FBI development. A Washington Post-ABC News tracking poll released Sunday showed Clinton’s lead over Trump narrowing to just one percentage point.

The ABC-Post poll also showed that the majority of likely voters remain unmoved by the FBI’s announcement, but 34 percent did say they are less likely to vote for Clinton as a result. About two-thirds of those respondents were Republicans or Republican leaning independent voters.

Trump’s campaign manager, Kellyanne Conway, characterized the FBI’s unprecedented announcement as proof that there is something questionable in the new batch of emails, which the FBI has not suggested. Conway said the announcement feeds into questions about Clinton’s character and a “constant cloud of corruption” that give voters pause.

Trump “just sees that there’s this constant cloud of corruption that follows Hillary Clinton around. And for the FBI to make this remarkable move 11 days before the election means there must be something there,” Conway said on ABC’s “This Week.” “Look, I think for the voters at this stage, this plays right into their reluctance about Hillary Clinton anyway. … So there is political currency attached to this.”

Kaine said that such an announcement was unprecedented and stressed that it remains unclear whether any of the new emails were written by Clinton or sent to her. He called the emails a “distraction” and said he and the campaign are focused on the final stretch of the campaign.

“These could be duplicates of what’s already been analyzed. They could be things that don’t have anything to do with Hillary Clinton. We can’t speculate about it,” Kaine said.

Campaign manager Robby Mook called the renewal of the probe “very strange” and said the campaign was caught off guard. He urged the FBI to release more information about the probe.

Abedin was not seen traveling with Clinton on Sunday or Saturday.

Clinton campaign chairman John Podesta defended Abedin during an interview with CNN in which host Jake Tapper asked whether Abedin had withheld information from the FBI.

The Clinton campaign, meanwhile, announced that Kaine would campaign in Arizona later this week, showing that the campaign is still interested in expanding the electoral map even as many in the Democratic Party argue the campaign should retrench and focus on key states.