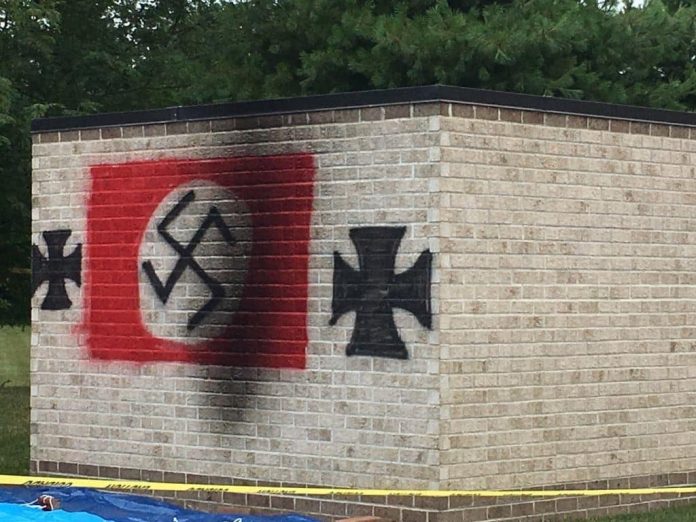 A number of gravestones of British and Commonwealth World War II soldiers in the Netherlands have been defaced with swastikas and other markings, Agence France-Presse reported Friday.

The desecration of the graves, at the Mierlo War Cemetery near the southern Dutch city of Eindhoven, comes at a time when the Netherlands is preparing to commemorate the 75th anniversary of the beginning of its liberation from Nazi occupation.

A police statement said, “We take the matter very seriously and have started an extensive investigation.” The statement indicated that police were also looking into other recent instances of vandalism.

A large swastika was painted on the chapel of the cemetery. Several graves were defaced with letters. A large cross was also defaced.

The phrase “MH17 Lie” was written on an outer wall of the cemetery. The majority of passengers who were killed when Malaysian Airlines Flight 17 was shot down in 2014 over eastern Ukraine were Dutch.

Henk ten Westenenk, the cemetery’s administrator, told the De Telegraaf newspaper, “The cemetery was already vandalized last weekend. We had it cleaned on Tuesday and now it is hit again.”

A caller to a Dutch radio and television station said, “My heart weeps. There are young guys of 17, 18 years old buried here. They helped liberate our country.”

In protest of the vandalism, white roses were anonymously left at the cemetery.

Recent times have seen an increase of bigoted and antisemitic graffiti appearing across Europe.

The trend has been particularly prominent in France. In February, some 80 Jewish graves at a cemetery in the northeastern French commune of Quatzenheim were defaced with swastikas and other graffiti by vandals.