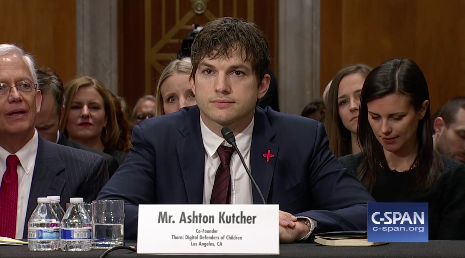 Actor Ashton Kutcher recounted a Talmudic tale after testifying before the Senate Foreign Relations Committee during an informal hearing on human trafficking.

“[B]eing here today, I was reminded of a story a friend of mine told me about a rabbi named Hillel, who was asked to explain the Torah while standing on one leg. And he said, ‘Love thy neighbor as thyself. Everything else is just commentary,’” Kutcher, a longtime “student of Kabbalah,” told Committee Chairman Senator Bob Corker.

Kutcher– who was at the session as the co-founder of the initiative “Thorn: Tech Innovation to Fight Child Exploitation,” which he established in 2009 with his then-wife Demi Moore – got the story slightly wrong, but his sentiment was received in the spirit in which it was clearly intended.

The actual tale is about Hillel who was approached by a gentile who wanted to convert to Judaism, but only on condition that he would be taught the entire Torah while he, the prospective convert, stood on one leg.

Hillel said to the man, “What is hateful to you, do not do to your neighbor. That is the whole Torah; the rest is the commentary of this; now go and study it.”

Kutcher, who is not Jewish, has visited Israel many times. In 2013, he called the country “near and dear to my heart,” saying that going there was like “coming back to the source of creation.”