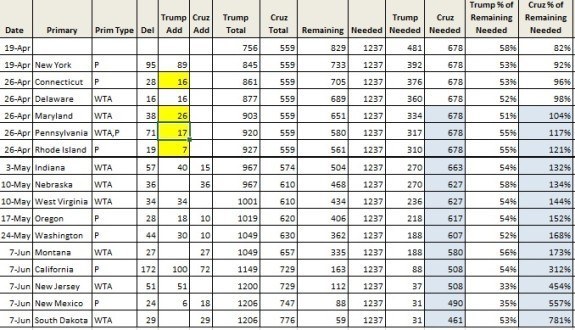 As of today, April 27, Ted Cruz is mathematically eliminated from winning the Republican nomination outright.

THE GATEWAY PUNDIT also predicted that only 634 delegates would remain and therefore Cruz would need more delegates than would be available.

It is clear that Cruz was eliminated last night.

It is not clear yet on how devastating the final numbers will be for Cruz.

There are fewer delegates remaining than THE GATEWAY PUNDIT originally projected because the delegates in Wyoming, Colorado and North Dakota were allocated in shady voter-less elections after April 2nd.

After last night’s primaries, Cruz has 559 delegates. He did not win a single delegate last night.

There are only 651 available.

Here is the updated chart with last night’s results.