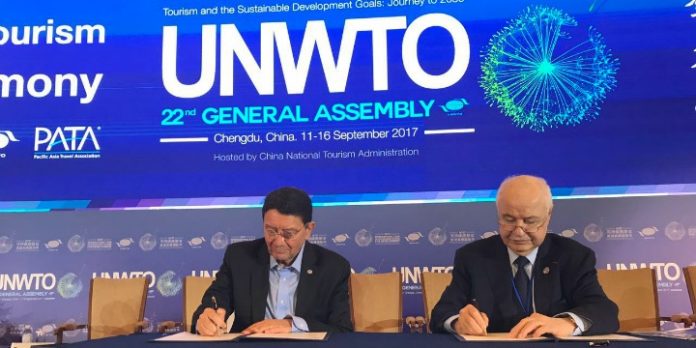 A wealthy Jordanian businessman who traffics openly in antisemitic conspiracy theories has been appointed as a “special ambassador” by the United Nations agency dealing with international tourism.

The UN World Tourism Organization (UNWTO) announced this week that it had named Talal Abu Ghazaleh as Special Ambassador of Tourism and the Sustainable Development Goals in advance of its summit in Russia in 2019. Abu Ghazaleh, a Palestinian who was born in Jaffa in 1938, is the founder of The Talal Abu-Ghazaleh Organization, an accounting and consulting company deemed by Forbes magazine to be a market leader in the Arab world. A keen supporter of the UN, Abu Ghazaleh has been rewarded by recent UN Secretary-Generals – including Kofi Annan and Ban Ki Moon – with top positions on several UN Task Forces.

Despite his access to some of the world’s top diplomats, Abu Ghazaleh has never hidden his antisemitic views. Interviewed by the BBC‘s Arabic TV in January of this year, he spoke at length of his “plan” to “transfer” the Jewish population of Israel to other countries.

Abu Ghazaleh continued: “I’m prepared to secure jobs for them all, and to run an international plan to transfer them.” He then repeated the widespread myth in the Arab world that every Israeli citizen has a second passport. “They won’t need to worry about passports or visas, because they all have dual citizenships – Israeli citizenship and citizenship of his country of origin,” he claimed.

Abu Ghazaleh is also an enthusiastic proponent of another popular Arab conspiracy theory; that the Al Qaeda terrorist attacks of September 11, 2001, were the consequence of a “Zionist plot.”

Describing, in a 2010 interview, the 9/11 atrocities as an “isolated incident” that was “carried out by a group called the Taliban,” Abu Ghazaleh opined: “In this day and age, Zionist power controls the decision-making centers. I always say that just like us Arabs, the US is a victim of Zionist influence, which often – if not always – steers US decisions against American interests, and in keeping with Zionist interests at all times.”

He continued:”Hence, global Zionism created the notion of an enemy called ‘the terrorist Islam…Therefore, to put it in an historical context, Zionism, which has been plotting all this time, came across an historic opportunity, and convinced the US administration that this was an opportunity for it as well.”

Insisted Abu Ghazaleh: “This is how it all began. This is how the war began.”

Additionally, the businessman appears to be tied to western anti-Zionist organizations, including the Electronic Intifada website and Zochrot, a Tel Aviv-based pro-Palestinian group that receives generous funding from several sources – among them European development agencies that are themselves recipients of tax-payer revenues.

An article on the website of Abu Ghazaleh’s company praised both groups for raising awareness of a property in Jaffa that housed a hotel previously owned by the Abu Ghazaleh family. Zochrot’s mission, as Abu Ghazaleh wrote approvingly, is “to promote the Jewish Israeli public’s responsibility for the ongoing Nakba and to exercise the Palestinian refugees’ right of return as its necessary historical redress.” The term “Nakba” – Arabic for “catastrophe” – is used by many Palestinians as a shorthand for the creation of Israel in 1948.

The present UN Secretary-General, Antonio Gutteres, has made clear his opposition to antisemitic agitation, along with his belief that calls for Israel’s elimination are a form of antisemitism. Speaking at Yad Vashem, Israel’s Holocaust memorial, in August this year, Guterres pledged to “do everything possible to fight antisemitism in all its expressions.”

“I understand the security concerns of Israel, and I repeat that the idea or the intention or the will to destroy the State of Israel is something totally unacceptable from my perspective,” Guterres declared.