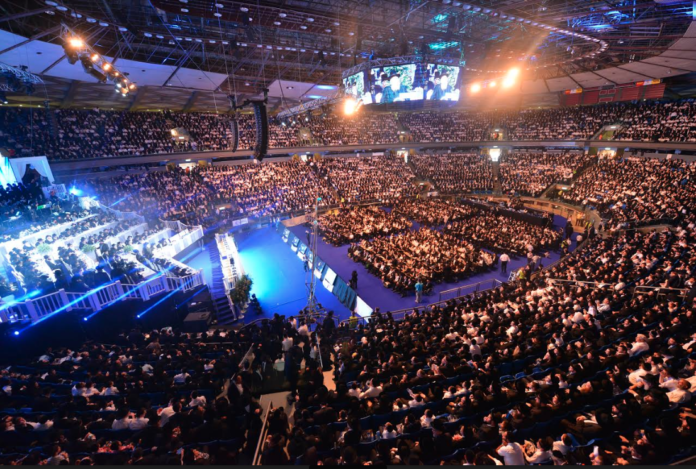 “Our FATHER is making a simcha! This is a simcha of Hashem Yisborach Himself who is saying, ‘chazu banai chavivai – Look at my dear children who forget all their difficulties and immerse themselves in Torah to such an extent that they have taken tests on all of Shas!!’”

These were the impassioned words of HaGaon HaRav Shimon Galei, shlita, last month at the massive Dirshu World Siyum at the Yad Eliyahu Stadium in Tel Aviv, when he addressed thousands of Yidden who had taken Dirshu tests throughout Shas; among them more than 400 ‘Shas Yidden’ who had been tested cumulatively on all of Shas!

In the United States, however, the Torah accomplishments of heroic lomdei Dirshu, especially the myriad true Shas Yidden who have invested their hearts and neshamos into learning and being tested, have never been celebrated on the grand scale that they deserve.

This coming Sunday at the Prudential Arena in Newark, at the New Jersey Performing Arts Center and at the Newark Symphony Hall, a grand celebration of true Torah accomplishment of lomdei Torah who have learned, toiled, reviewed, reviewed and reviewed yet again and have been tested on Shas, will be celebrated by all of Klal Yisrael led by Gedolei Yisrael who represent the entire gamut of Torah Jewry!

Indeed, the tens of thousands of men and women attending will collectively celebrate the simcha of our FATHER in Newark this Sunday.

One of the highlights of the event will be the presence of the venerated Rosh Yeshiva of Chevron, HaGaon HaRav Dovid Cohen, shlita, who will be making the journey from Eretz Yisrael specifically to attend and address the siyum. Rav Dovid has seen firsthand the colossal positive impact that learning with Dirshu programs has had on his talmidim and will share his deep impressions as well as the magnitude of the simcha that will celebrate the eternal, unbreakable bond between Klal Yisrael and the Torah Hakedosha.

There will be numerous other Roshei Yeshiva, Admorim, Rabbonim and Dayanim both from the United States and abroad who will be gracing this truly historic event where the simcha of immense Torah achievement will be celebrated.

Celebrating the Creation of a New Generation of Real Kinyan Shas Yidden!

The Dirshu World Siyum in America this Sunday will be a celebration of hodaah al ha’avar, thanks for the past – thousands of Shas Yidden was a concept that many thought was nearly extinct, a dream from pre-war Europe before Hitler murdered the towering gaonim of the past -as well as a bakasha and celebration of the asid, the future. Beginning with Masechta Brachos, many thousands of new lomdim have joined Dirshu’s accountable Kinyan Shas program where, as Dirshu’s Nasi, Rav Dovid Hofstedter, shlita, recently said with tremendous emotion, “Chavrei Dirshu don’t ‘do the Daf’, they don’t ‘learn the Daf’,’ they LIVE the Daf! The Daf is their life, it is their very essence, it is the air that they breathe! A Dirshu Yid wakes up in the morning thinking about the Daf and goes to sleep thinking about the Daf. A Dirshu Yid leaves no crack and crevice in his day for the yetzer hara to enter. He takes advantage of every minute to learn; more, better, deeper. He is not satisfied with a small chelek in Torah, he wants a KINYAN and that comes with total commitment to learning.”

This will be celebrated this Sunday, at the massive completely sold out events at the Prudential Center, New Jersey Performing Arts Center (NJPAC), and by Dirshu women at the New Jersey Symphony Hall, all in Newark, and by tens of thousands more who will tune in on various platforms to the live-streaming of the World Siyum all over the world.

The Front Line Heroes and the Behind The Scenes Heroines

The obvious heroes of Dirshu are those Yidden who day in and day out, year in and year out, plug away, learning and chazering, such as the Yid from Antwerp who was at the recent Dirshu European Siyum in London. This yungerman works in a supermarket and returns home daily at 6:00 p.m. On the week of his Dirshu test, after returning home from work, eating a quick dinner and seeing his wife and children, this yungeman goes to sleep for several hours. At 12:00 a.m., he is back in the bais medrash where he learns for 7-8 hours until Shacharis! This is something that he has done repeatedly for more than 7 years! It wasn’t a one time thing.

That yungerman and any other lomeid Dirshu would not be able to do what they do without their equal partners in learning, the heroic Dirshu wives who possess unparalleled love of Torah and are willing to sacrfice so much because they love the Torah so much. Indeed, most of them don’t look at what they do as a sacrifice because the payback in simchas hachaim, love of Torah and sipuk hanefesh that their husbands and children derive as a result makes it all worthwhile.

At the Newark Symphony Hall, the climactic events at the Prudential Center will be shown live. In addition, the women there will be treated to special programing designed just for them. A keynote address will be given by the prestigious Rebbetzin Sarah Meisels, a daughter of the illustrious Bobover Rebbe, Rav Shlomo Halberstam, zt”l. There will also be a live original musical production made especially for the Dirshu World Siyum by world renowned inspirational composer and singer, Mrs. Miriam Israeli as well as live productions by Mrs. Bracha Jaffe and Mrs. Malky Giniger and much more.

The siyum in America is the culmination and climax of an entire series of Dirshu World Siyumim throughout the World, from Yerushalayim to Manchester, from France to Johannesburg, from London to Tel Aviv… where Torah Jews have gathered to show how much they value accountable limud haTorah and how Dirshu is literally transforming the Torah landscape throughout the world.

It is the Gedolei Yisrael from all over the world, however, who are setting the tone by serving as Dirshu’s guiding lights in all matters, and showing Klal Yisrael how much they value the complete revolution in limud haTorah that Dirshu has accomplished.

The venerated Sar HaTorah, Rav Chaim Kanievsky, who rarely ventures from his home came with great mesiras nefesh to the Dirshu Siyum several weeks ago in Yad Eliyahu. He wrote, “In our times, there is no greater yom tov than today – when thousands of talmidei chachomim in the Dirshu program have completed Shas!”

The Sanzer Rebbe, shlita, expressed his joy about the grand scale siyumim, “It is clear that more people are joining the Daf HaYomi because of the large gatherings celebrating the accomplishments of the lomdim. Recently, while travelling to and from America, I saw so many Yidden, learning the Daf HaYomi. This wasn’t always the case. Large siyumim facilitate so much limud haTorah!”

Perhaps the greatest way to encapsulate the simchas haTorah of the World Siyum to be held this Sunday are the words said by the Gadol Hador, HaGaon HaRav Aharon Leib Shteinman, zt”l, at Dirshu’s previous World Siyum when, at the age of 103, he came with mesiras nefesh. He said, “A gathering of tzaddikim is good for them and good for the world. A gathering of Reshaim is bad for them and bad for the world. It is good,” Rav Shteinman exclaimed forcefully, “to make gatherings like this! They strengthen us all, especially in [difficult times] like this…”