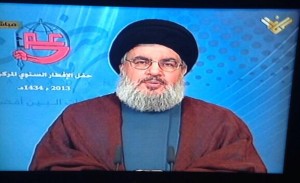 Hezbollah leader Hassan Nasrallah spoke yesterday from his bunker in an undisclosed location, with his speech broadcast on screens across the terror organization’s Dahiyah stronghold in south Beirut to mark “The Loyalty to Martyrs and Leaders” day.

threatened yesterday to fire missiles at the ammonia plant in Haifa, which he claimed would cause an explosion similar to that of a nuclear bomb.

Nasrallah had a message for IDF Chief of Staff Gadi Eisenkot: “It’s simple math. A few missiles on a few ammonia plants equals the same amount of death as an atomic bomb…you can destroy Lebanon and Dahiyeh. You have the strongest air force, you have missiles, and you have other means by which to do it. But we can do the same thing to you (Israel) with only a few missiles aimed at a few ammonia plants.

He continued: “Haifa is just one of many examples. The leaders of Israel understand that the resistance has the ability to cover the entirety of occupied Palestine with missiles. We must keep this capability because it acts as a deterrent for the Third Lebanon War. As I said to you on the anniversary in memory of the victims in Qunietra, we do not seek war nor do we want war. The strategy of the resistance is not to start wars of this type, but we must be prepared for war in order to deter against it, in order to be able to deal and conquer it.

“The residents of Haifa are worried about a deadly attack, with or without a war. They worry in any case. They are afraid of a large, deadly attack on the ammonia plants. These plants are in Haifa, and possibly even beyond the city. The tanks in the ammonia production facility contain 15 thousand tons of gas which will cause the deaths of tens of thousands.”