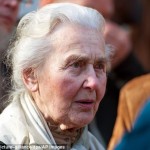 An elderly German grandmother has been sentenced to ten months in jail for denying the Holocaust.

Ursula Haverbeck, 87, is a friend of Nazi S.S. chief Heinrich Himmler’s daughter and has publicly claimed that the Auschwitz concentration camp, where at least a million people were killed, was “nothing more than a labor camp.”

During her defense, Haverbeck reportedly said the Holocaust “was the greatest and longest lived lie in history.”

This is not the first time she has been sentenced for her Nazi-sympathizing views. Read more at The Daily Mail.