This startling photo of an armed teacher watching over Israeli schoolchildren has struck a chord with Newsmax readers who, reeling over the Newtown school massacre, say Israel has the right idea when it comes to protecting kids.

“The Israelis have it right. A psychopath would have to be crazy indeed to attack a school where everybody knows that the teachers are armed,” writes reader Allen Kenyon of Wisconsin.

“We could easily do what the Israelis are doing. How about some good old-fashioned American volunteerism?” adds John Studer.

“It seems that the Israeli’s have got the mass school thing figured out. After all when’s the last time you heard of a mass shooting of Israeli school children?” reader John Brecher writes.

David Ziegler tells Newsmax: “To the law-abiding citizen, [what is shown in the photo] is offensive. To the gun-wielding criminal, a sign like that may be enough to deter.”

“I’m sick to my stomach about the deaths of all those people, especially those children,” Ted Perry says. “Self-protection should be in everyone’s mind. I have to believe that there are qualified people in the teaching system [who] are very able and qualified to carry protection.”

Israelis would undoubtedly agree with these sentiments – their country, which has 79 guns per 100 residents, has just 0.09 weapons-related deaths per 100,000 people, according to statistics.

Israeli residents point to tight gun control laws the government has in place, with only 2.5 percent of the population legally able to carry a firearm. 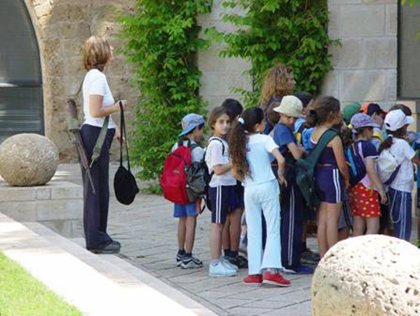 To obtain a permit in Israel, the applicant must be an adult citizen or permanent resident, speak Hebrew and have no physical or mental disabilities. In addition, there must be a valid reason for carrying a firearm, such as a necessity for work or a security issue.

The Jewish Press says the United States should learn from Israel in the proper licensing and permitting of guns.

“Guns in Israel are ubiquitous. There are no concealed carry laws in Israel, as every visitor sees right away. Guns are plentiful in the street, carried by settlers, soldiers, and security personnel, including the guards in front of schools, restaurants and malls,” the newspaper’s Shalom Bear reports.

“In short, people who have a good reason to carry a gun will likely be approved to do so. The difference between Israel and the U.S. regarding gun ownership is in the attitude.”

Israel has tightened its gun laws strong gun-laws in recent years. Tablet magazine said in 2000, there were approximately 400,000 legally owned firearms in Israel. Ten years later, the number has dropped to 180,000.
The United States boasts more guns per person than any other country in the world.

In 2007, there were 88 guns owned for every 100 Americans in the United States, easily topping Serbia which ranked second place with 58; Yemen with 54; Switzerland with 45; and Cyprus with 36, according to Switzerland’s Small Arms Survey project.

Last year, a Gallup poll revealed that 47 percent of American adults reported having a gun in their home or on their property. That figure was up a staggering 41 percent from 2010.

That is relatively low compared to some countries where homicides involving guns are out of control.

For example, the nation with the gun violence is Honduras, with at 68 murders per 100,000 people. That alarmingly high comes despite the fact that Honduras has only about 6 firearms per 100 residents.

Honduras is followed by El Salvador and Jamaica, both with about 39 per 100,000.

And yet, with random acts of gun violence on the increase in the United States – as evidenced by Friday’s Newton shootings and the Aurora movie theater massacre over the summer.

It is relatively easy to purchase firearms instantly in the United States, a far cry from some European nations.

In France, applicants for gun licenses have to take lessons for six months in a club of the official French Federation of Shooting, followed by a vigorous police background check. A license is in effect for five years and weapons must be stored in a locked safe.

In countries like France, Norway and the United Kingdom, the right to privately own a gun or guns is not guaranteed by the constitution.

And Scandinavian nations have been working diligently to strengthen their gun laws following the twin attacks in July 2011 that left 77 people dead in Norway.