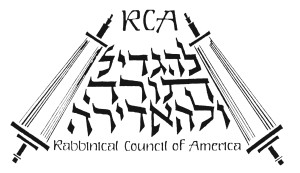 Determined to “vigorously protect and support its members’ religious freedom and responsibility to practice, openly teach, and publicly defend Orthodox Jewish principles” in a period of rapid and uncertain legal and cultural change, the 1,000 members of the Rabbinical Council of America adopted a resolution this week asserting that it will “expand its efforts to support other religious groups in exercising their freedom of religion,” and that it will continue to support amicus legal briefs to preserve religious liberty.

The following is the full text of the RCA resolution, provided to Matzav.com by an RCA member:

Whereas the United States and Canada have long assigned the highest priority to protecting freedom of religion, even when the tenets of minority religions have conflicted with those of majority faiths; and,

Whereas rabbinic and other communal leadership positions in the Orthodox Jewish community require principled decision-making that sometimes conflicts with changing cultural norms; and,

Whereas US and Canadian religious leaders in general, and Orthodox Jewish leaders in particular, often find themselves vulnerable to attack for defending their fundamental religious principles; and,

Whereas defenses of alternative sexual lifestyles and “gender fluidity,” as well as euthanasia, physician-assisted suicide, abortion, and other practices are quickly evolving from advocacy for legal recognition to the application of coercive measures that may compel many religious Americans and Canadians to violate their religious principles through the promotion of, complicity with, or participation in objectionable behavior; and,

Whereas Jewish religious law applies to all times and places, and its teachings are not subject to suspension even when they are perceived to conflict with the societal norms or temporal laws in contemporary society; and,

Whereas governmentally imposed measures that force American or Canadian citizens to teach, affirm, or provide material support to religiously prohibited lifestyles—as, for example, new measures in Ontario and British Columbia that force religious high schools to teach their students about such lifestyles in a positive manner dictated by government—constitute a violation of the freedom of religion.

Therefore, the Rabbinical Council of America

Resolves to vigorously protect and support its members’ religious freedom and responsibility to practice, openly teach and publicly defend Orthodox Jewish principles, including but not limited to: (i) refraining from the celebration or endorsement of intimate relationships that are incompatible with the Torah’s understanding of proper traditional marriage between men and women, (ii) avoiding the implementation of what they see as unacceptable policies that follow from the now-prevalent concept of “gender fluidity,” (iii) supporting the sanctity of human life in the face of movements to legalize euthanasia and physician-assisted suicide, and (iv) opposing abortions that they believe to be prohibited by Jewish law.

Commits to educating the public regarding tenets of Orthodox Judaism that its adherents are religiously proscribed from violating, so that American and Canadian government officials can more easily avoid infringing upon the religious liberty of Jewish citizens.

Resolves to expand its efforts to support other religious groups in exercising their freedom of religion. The RCA will continue to support amicus legal briefs advocating the preservation of religious liberty and the free exercise of religion in the United States and Canada, so that all citizens may enjoy the freedom and security to remain true to the fundamental obligations required by their religious consciences.