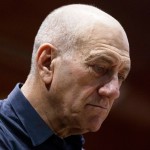 At the end of a three-hour meeting on Thursday, no agreement was reached between State Prosecutor Shai Nitzan and the attorneys of former Israeli Prime Minister Ehud Olmert. In an interview given by Nitzan to Channel 2 News shortly before the meeting, he stated he does not intend to treat Olmert any differently due to his status.

Ahead of a Tuesday hearing on Olmert’s appeal in the Talansky case, in which he was sentenced to eight months in prison, his attorneys requested to allow him to serve both his prison sentences, in the Talansky case and in the Holyland Affair, concurrently. In return, they would have withdrawn their appeal and refrained from any further legal action.

The prosecutor clarified that Olmert must first agree to confess to obstruction of justice or the State would consider issuing yet another indictment against him.

“We will go by the principle of equality under the law when discussing this,” Nitzan said, referring to the possibility of reaching a deal with Olmert’s attorneys, “and if something comes up that I will find compatible with the public interest, we will go in that direction. If a person is willing to confess, take responsibility and accept a proper punishment, it should be ended with that.”

Nitzan later told Channel 2 that “I’m not going to give Olmert any celebrity discounts. If we think that the public interest will benefit from the deal, I’ll do it. If the defendant is willing to admit and receive proper punishment, that’s why you make plea bargains.”