Ynet reports: “It’s a real wonder,” one of the talmidim at the Kamenitzer Yeshiva says about his new classmate – a white dove. “This holy bird just listens to full lessons.”

Several weeks ago, during a shiur in the Yerushalayim yeshiva, a white dove entered the bais medrash, sat on the window sill and flew out at the end of the lesson.

The following days, the bird would arrive at the yeshiva and stand in the corner for the entire lesson – prompting the excited yeshiva students to view it as a sign from Hashem.

They created a “studying circle” around the bird and began reading Gemara and begging forgiveness from the soul which they believed “wandered” into the dove. Surprisingly, these actions did not help send the mysterious bird away.

Rumors about the righteous bird became the talk of the day in Yerushalayim, and students watching the dove with binoculars discovered that it would visit the rooftop of the nearby Vizhnitz yeshiva as well.

The yeshiva students tried to test the bird once again and sealed all the entrances to the yeshiva, but it “miraculously” managed to get in and attend its regular class on time.

“A few days ago,” Bakehila reported, “one of the yeshiva students, who could not bear the great waste of time that could be spent on studying Torah, went over and kindly took (the bird) to his home, where he fed it.”

The yeshiva student even took the dove to a slaughterer, but it turned out that the magnificent bird does not meet the rules of kashrus and the yeshiva is now contemplating what to do with it. 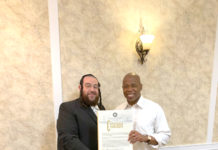