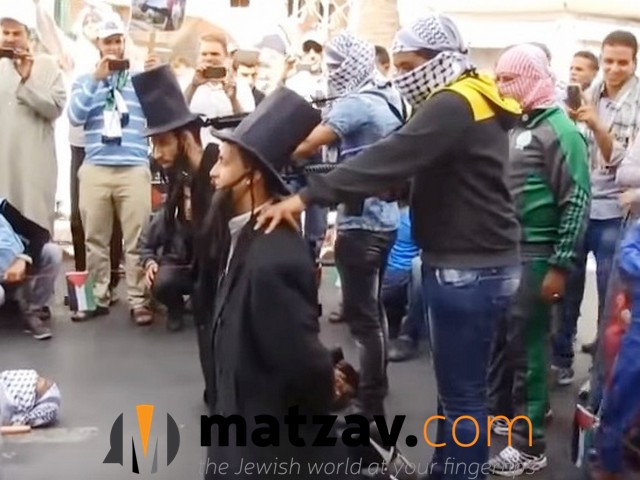 Thousands marched in Casablanca, Morocco on Sunday, in a show of solidarity for Palestinians amid the recent wave of Israeli-Palestinian violence, according to a video released by the Middle East Media Research Institute (MEMRI).

Demonstrators — among them teenagers and young children — wearing smocks bespattered in red paint, or the colors of the Palestinian flag, chanted, “Death to Israel,” and “We will sacrifice our soul and our blood to you, Al-Aqsa,” in reference to the holy site in Jerusalem that has reportedly been at the center of the recent terror surge in Israel.

“We are proud of these strong ties, under the guidance of the king, in support of the Palestinian people,” Zohei Al-Shan — who was named in the video as the Palestinian ambassador to Morocco — said on camera.

Al-Shan also blamed the lack of peace in Israel on Israeli security personnel’s killing of Palestinians, many of whom were in the middle of carrying out attacks against Jews when shot.

Another part of the demonstration, also featured in a video uploaded to Facebook, shows two men dressed in Orthodox Jewish garb — albeit with obscenely tall cylindrical black hats — being led by West Bank Palestinian activists in black-and-white kaffiyehs (as opposed to the traditionally green ones worn by their counterparts in the Gaza Strip) holding toy assault rifles behind a miniature float of the Dome of the Rock.

At one point in the MEMRI video, the two “Orthodox” men are seen chipping away at the Dome of the Rock with pickaxes. They are subsequently rounded up, fake-stabbed and “executed.”

The current violence was prompted in part by rumors that Israel was trying to change the status quo on the Temple Mount, allowing Jews the long-barred right to pray there — a charge Israel forcefully denies. On Sunday, Israel and Jordan agreed to round-the-clock monitoring of the site to help maintain security.

Underneath the Morocco video posted on Facebook, the user wrote “Nazislamisme in action in Casablanca, Morocco on Sunday under the auspices of the authorities,” apparently using a portmanteau combining Nazism with Islam.

The demonstration showed clear demonization of Israeli soldiers and Orthodox Jews. Protesters marched across the Israeli flag laid out on the ground, and garbage collectors threw trash into plastic bags decorated with the Israeli flag.