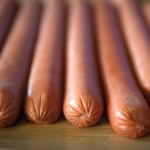 A World Health Organization study released Monday categorizes processed meats like hot dogs as “carcinogenic to humans,” along with asbestos and smoking.

The study adds that red meat likely causes cancer, too.

Though the 22-member panel behind the study was not unanimous, the research has raised alarms in the beef industry, which takes in some $95 billion a year.

“We simply don’t think the evidence support any causal link between any red meat and any type of cancer,” a spokesman said.

The study, it is assumed, was done on non-kosher meat. Would kosher meat be different? Who knows.