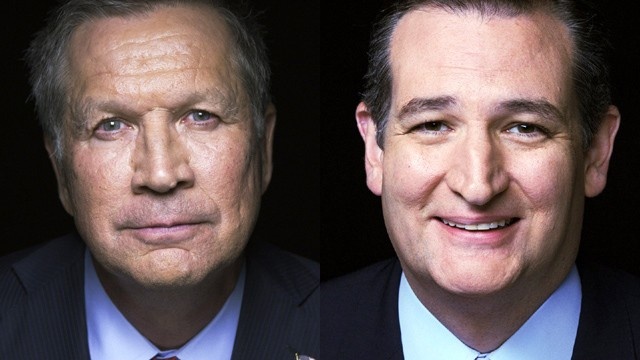 “Having Donald Trump at the top of the ticket in November would be a sure disaster for Republicans,” the statement said. “To ensure that we nominate a Republican who can unify the Republican Party and win in November, our campaign will focus its time and resources in Indiana and in turn clear the path for Gov. Kasich to compete in Oregon and New Mexico, and we would hope that allies of both campaigns would follow our lead.”

The following is a report on this development from the Washington Post:

Donald Trump’s two remaining Republican presidential opponents have agreed on a strategy to divvy up three states holding primaries in the coming weeks — an unusual and urgent arrangement aimed at stopping the mogul from clinching the GOP nomination.

The campaigns of Sen. Ted Cruz, Texas, and Ohio Gov. John Kasich released written statements within minutes of each other Sunday night calling for Kasich to effectively stop competing in Indiana and for Cruz to clear the way for Kasich in New Mexico and Oregon. They called on allied third-party groups to do the same.

“Encouraging,” Tim Miller, a spokesman for the anti-Trump Our Principles PAC, said of the Cruz-Kasich deal. “See you in Cleveland.”

The statements came as Trump stood on the verge of another week of sweeping victories, with five Eastern states where he is favored to win set to vote Tuesday. Kasich and Cruz are trying to trigger a contested convention where party activists would decide the GOP nominee.

The deal was discussed in a private meeting last week between Cruz campaign manager Jeff Roe and Kasich chief strategist John Weaver in Hollywood, Florida, at the sidelines of the Republican National Committee meeting, said a source with knowledge of the discussions who spoke on the condition of anonymity. The deal was finalized Sunday in phone calls between the two advisers.

A version of the idea already was effectively in place. Cruz skipped campaigning altogether in Rhode Island, Connecticut and Delaware last week — three states that will vote on April 26. Kasich campaigned in the former two states.

“To ensure that we nominate a Republican who can unify the Republican Party and win in November, our campaign will focus its time and resources in Indiana and in turn clear the path for Gov. Kasich to compete in Oregon and New Mexico, and we would hope that allies of both campaigns would follow our lead,” Roe said in a statement.

A few moments later, Weaver issued a statement saying: “We are very comfortable with our delegate position in Indiana already, and given the current dynamics of the primary there, we will shift our campaign’s resources West and give the Cruz campaign a clear path in Indiana.”

He added: “In turn, we will focus our time and resources in New Mexico and Oregon, both areas that are structurally similar to the Northeast politically, where Gov. Kasich is performing well. We would expect independent third-party groups to do the same and honor the commitments made by the Cruz and Kasich campaigns.”

Cruz has shifted his focus beyond Tuesday’s contests to Indiana, which will vote on May 3. He already has held several campaign events in the Hoosier State in recent days and plans more this week.

Limited public polling in Indiana has shown that Cruz stands the best chance of stopping Trump in Indiana. Cruz allies believe Kasich is siphoning votes away from him, as evidenced by a pro-Cruz TV ad released last week that urged voters not to back Kasich.

A loss to Trump in Indiana would be a devastating blow to Cruz, who is hoping to undercut some of Trump’s momentum heading into the final month of the race.

But both the Cruz and Kasich campaigns said they intend to compete hard in the remaining states, signaling that the scope of their unorthodox arrangement will be limited. The biggest remaining prize is California on June 7. The state will award 172 delegates to the Republican National Convention in Cleveland.

Oregon will vote on May 17. New Mexico’s primary is June 7.

The move would send Kasich west sooner than his rivals expected. Campaign sources said that two planned Tuesday events in the Indianapolis area would be canceled; the candidate would attend a local fundraiser, then move on.

Polls of the Hoosier state have found Kasich stubbornly in third place. The Club for Growth, the pro-Cruz group that ran the TV ad warning voters that a vote for Kasich amounted to a vote for Trump, said it planned to make a sizable investment in the state.

Trump currently leads the Republican race with 845 delegates, according to the latest Associated Press count. Cruz trails with 559, and Kasich is much further back, with 148. To win the nomination outright, a candidate must clinch 1,237 delegates.