House Democrats will offer $1 billion in funding for border security measures in a bill to reopen the government next week, a Democratic source told CNN on Saturday.

CNN reports that none of the money will be eligible for use in construction of President Trump’s signature border wall as Democrats view other border security measures as more effective.

The bill would be the 10th Democratic bill to reopen the government since Democrats took control of the House this month, though none of the plans have made headway in the Senate due to Majority Leader Mitch McConnell’s (R-Ky.) refusal to bring up any bill for a vote without the support of Trump.Read more at The Hill. 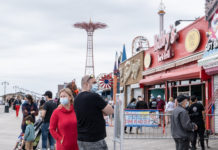 NYC Enters Phase Three Of Reopening. Here’s What You Should Know.