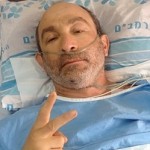 Gennady Kernes, who has served as mayor of the second-largest city in Ukraine since 2010, was shot by an unknown assailant last week while on his regular jogging routine in the eastern city. After emergency surgery in Kharkov, he was transported to Israel-first to Haifa’s private Elisha Hospital and then to Rambam, where a second operation was performed.

“He woke up, and he’s speaking a little,” said Moskovitz. “G-d willing, I hope to visit him soon.”

The rabbi added that a Chabad emissary in Haifa has been visiting Kernes regularly at the hospital. “Things are still delicate, but he’s getting better, and we hope he gets out of it,” said Moskovitz.

While unrest has rocked much of eastern Ukraine in recent weeks-with separatists taking control of municipal and other government buildings in Donetsk, Lugansk and other smaller eastern cities-Kharkov, which sits just 30 miles from the border with Russia, has mostly been spared. Many people have credited Kernes with maintaining stability in the city, but with the mayor now incapacitated, some fear that the delicate calm might be upended.

“People are worried that something will happen on the ninth of May,” Moskovitz explained, referring to the day of celebration that marks the former Soviet Union’s victory over the Nazis in World War II, and which is celebrated in eastern bloc countries and by Soviet veterans to this day.

“After the recent [tumultuous] news in Odessa, people are more worried because of how suddenly the situation disintegrated there,” he said. “We hope that everything remains calm here, and a stable peace returns to this country.”