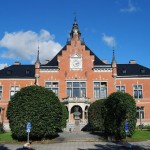 The Jewish community of Sweden was not invited to an annual anti-Nazi event commemorating Kristallnacht due to a perceived security risk, the Swedish newspaper Norrköpings Tidningar reported.

The organizers of “Umeå against Nazism,” held in the city of Umeå last week, said that anti-Semitic and anti-Israel protests have occurred at past events and that it would be an unsafe environment for Jews.

“In previous years, we have had a lot of Palestinian flags at these rallies, and even one banner where the Israeli flag was equated with a swastika,” said the organizers, according to a JNS.org translation.

Organizer and local Workers’ Party member Jan Hägglund said, “The Jewish community wasn’t invited because we assumed they might be uncomfortable around that sort of thing.”

The event centers on Kristallnacht, or the Night of Broken Glass, the massive pogrom against Austrian and German Jews that many consider to have marked the beginning of the Holocaust in 1938.

Some city officials did invite the Jewish community to rallies in protest of this exclusion, including a ceremony initiated by Umeå’s first deputy chairman of the municipal government. Agren said it the exclusion was typical for Umeå and that he felt ashamed.