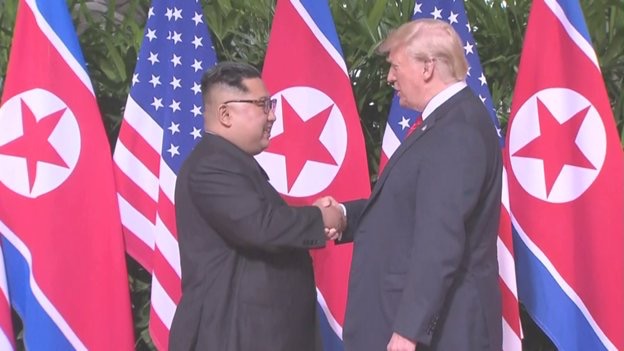 When asked by a journalist Tuesday about a denuclearized North Korea, Trump said that he showed the delegation a video projecting two outcomes for the nation: “one of moving back, and one of moving forward.” The video suggested, USA Today writes, that “Kim needed to ‘shake the hand of peace’ if he wanted to stand any chance of taking his country out of ‘isolation.’” Trump expanded on his answer by emphasizing the nation’s potential for economic development. “As an example, they have great beaches,” Trump told the assembled reporters. “You see that whenever they are exploding their cannons into the ocean. I said, boy, look at that view, wouldn’t that make a great condo? And I explained it. I said, instead of doing that, you could have the best hotels in the world. Think of it from the real estate prospective. You have South Korea, you have China, and they own the land in the middle. How bad is that, right? It’s great. … (Kim) looked at that tape. He looked at that iPad. I’m telling you, they really enjoyed it, I believe. OK?” Read more at USA TODAY.